Be more strategic with your Displays!

Written by Rune Alexander Rødbro
Updated over a week ago

The default way of displaying a Display is to define a URL path, that will show a Display. This is great! But you can get even more specific

Using GTM to display on events

The way to get starting with showing Displays on your website is to simply share the embedded Display script as shown here:

However, in this article we're going to explore how you can display a specific Display on user behavior rather than just which URL they land on.

To do this, we will use the power of GTM to determine which user behaviour we want to prompt a specific display. To do this, the script we're going to use for the custom HTML for the tag is the same as the default one, with a small addition:

This addition makes the script wait for Display to be ready, and then prompt a specific Display defined by the GUID in that snippet. Any Display will have a guid at the end of its URL, that can be found here:

The full script, that you will be using for the custom HTML is then the default embedded script with the snippet at the end:

Fire away(!) with GTM

Now we have our hands on a specific Display, that will trigger on whatever paramter you want from GTM.

You sell Pepsi. Atleast you do in this example! And you want people to be exposed to your Pepsi Display, if they search for Pepsi! 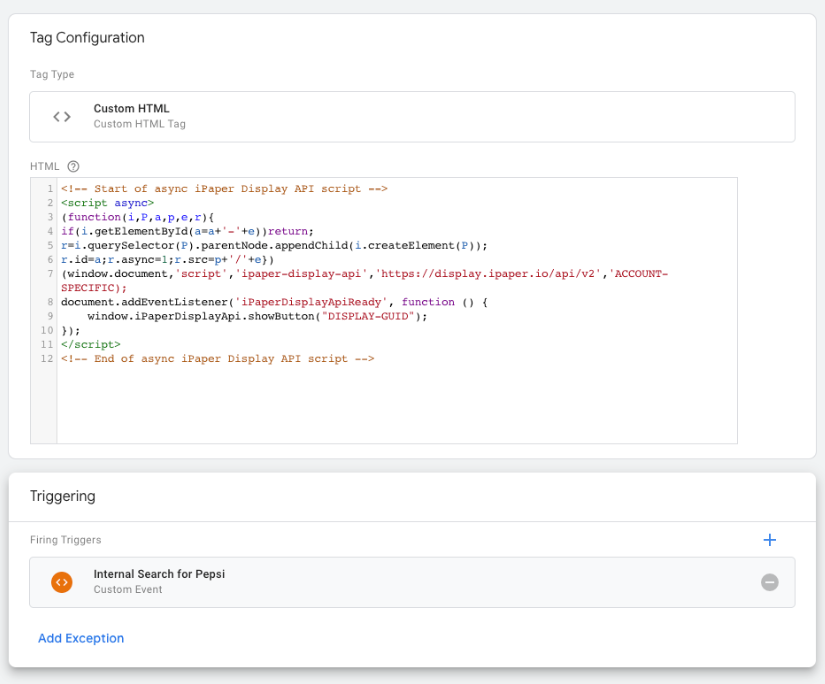 We make a new Tag, that is setup with our corrected script, to include the specific GUID, and the trigger is an Internal Search for Pepsi. That we have defined as: 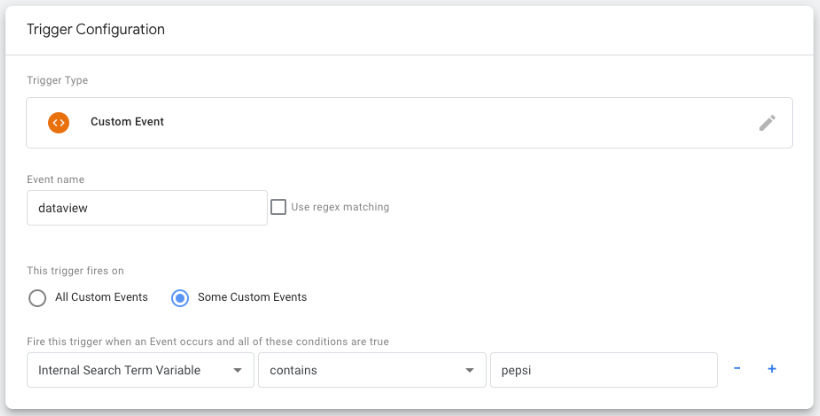 Which pulls from the searchTerm variable of the Data Layer:

Okay, back in reality - you might not be selling Pepsi. You might not even have a datalayer, that contains searchTerm.

But no doubt you have plenty of user-specific information in GTM. Let's imagine just a few examples from data, that is usually available through GTM:

Visitor is visiting your site from an older phone model - present them with your best deals on the newest phones!

Visitor is visiting your phone from a city or area, where you have a special pop-up store - show them the local deals!

Visitor is registered user, show them members only offers!

Visitor watches your on-site video about picking the best TV - why not show them a display with your best deals on TVs?

And anything else, you can think of!

Did this answer your question?